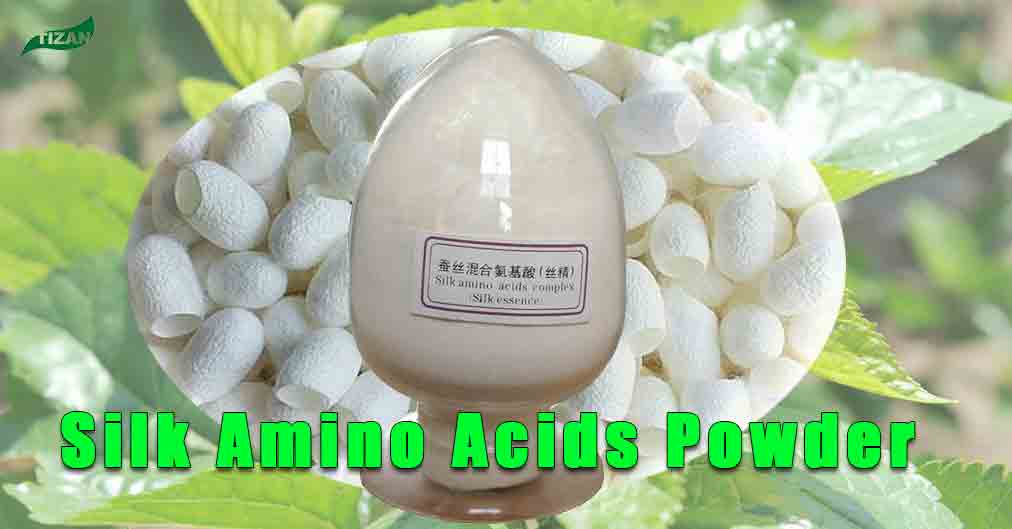 TIZAN Silk amino acids Silk Essence (SAAs) also known as Sericin is a natural water-soluble glycoprotein extracted from raw silk, it also named Silk Essence. It is used as an additive in skin and hair care products due to its high levels of serine which has excellent moisture preservation characteristics. As a water-based additive it is used to provide a protective barrier and silky feel to lotions, soaps, personal lubricants, hair and skincare products. Silk amino acids are produced by hydrolyzing (or breaking apart) silk proteins into smaller peptide chains, typically 18 to 19 amino acids in length. Silk amino acids have a lower molecular weight than silk protein powders and are moisturizing to skin and hair.

Water-soluble mixed amino acids, also called Fibroin-90, whose average molecular weight is about 90, which is acquired after the hydrolysis of silk fibroin. White or creamy white powder, or faint yellow transparent liquid, the ninhydrin reaction is positive.

Silk amino acids Silk Essence has hair-caring function depends on the absorbency, absorptivity, film-forming ability and moisturizing type it received by hair. Compared with other protolysates (collagen, bone collagen, glutin and so on), the biggest feature of fibroin is that it is easy to be absorbed by the hair.

Tizan specialize in Silk Amino Acids for several years, we supply Silk Amino Acids with competitive price, and our product is of the highest quality and undergoes strict, independent testing to ensure that it is safe for consumption around the world.